Check out our background with FINRA's BrokerCheck. 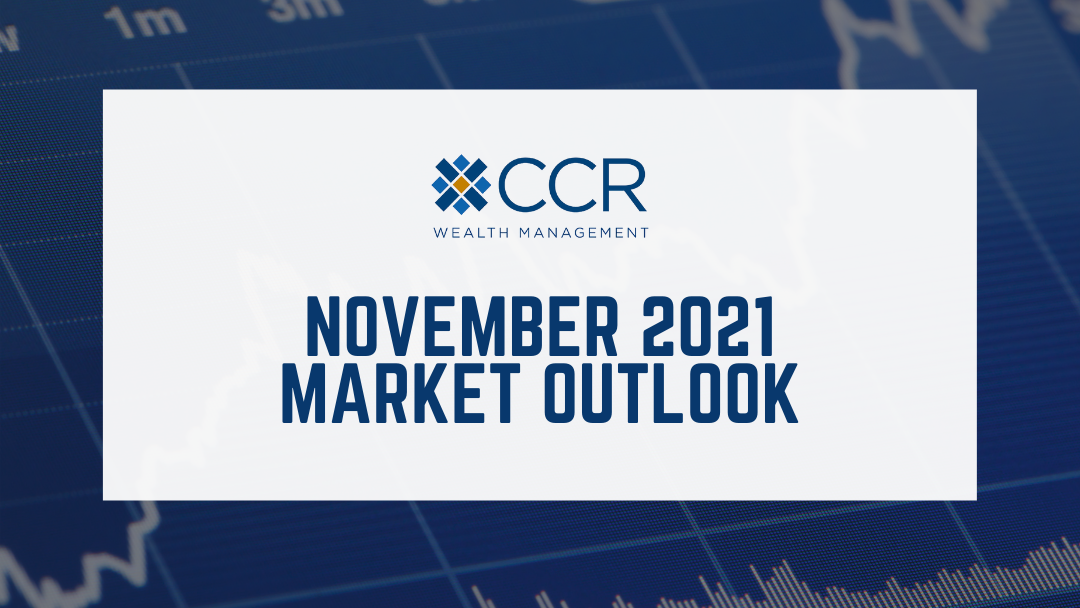 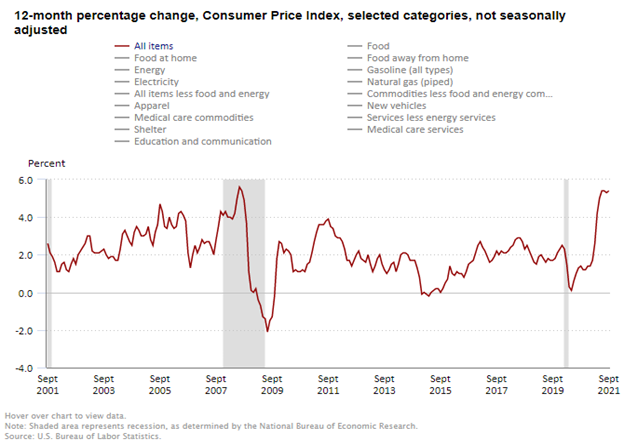 October’s release of CPI is scheduled for November 10, so we shall soon see whether the trend to higher prices continues (potentially problematic), remains “sticky” here around 5.4% (less problematic if temporary), or begins to revert down in the direction of the longer-term trend. The burst of inflation in 2008 was a fairly classic scenario, where price rises accompanied the tail-end of a market cycle, finally plummeting as the economic recession was confirmed. But now, in 2021-2022, with expectations having been guided by the Fed, the concept of “transient” inflation is openly debated among market watchers and other pundits. We have been ringside for many arguments for and against longer term inflation forecasts; from our own asset managers, our own subscription research, and of course the commentaries in the media.

Two things to consider: First, the annual growth in inflation can only have meaning if we consider the base level (i.e. the starting point for this measurement). While the high-print for CPI in July 2008 was 5.60%, the year-prior level of 2.40% in July 2007 was a normal, though mildly inflationary year—certainly not a pandemic year, or a pandemic-recovery year. Inflation measures in 2008 were mostly normal. However, components like oil and housing were in the midst of a moonshot (we recall well, having paid ~$140 to gas up our new Tundra as oil peaked above $140 per barrel!). And of course, housing was the root cause of the ensuing Financial Crisis and recession. Today’s 5.4% inflation picture includes a major price increase in a multitude of categories, including energy (oil & gas), housing (rentals and owner equivalent rental prices), and food (+10.5% a/o September 30), among other things.

Here’s the second thing: Oxford Languages defines transient as “lasting for a short time; impermanent”. We have not found any other lingual authority that adds a time scale to this definition of “transient”. We can consider the forecasts of the Fed governors themselves, of course, but they don’t specify exactly when we will see a reversion to the mean. We only get an annualized running average of their forecasts, and these forecasts certainly fuel debate. Below we display the Fed’s PCE inflation data (personal consumption expenditures, a gauge closely followed by the Fed), including forecasts to 2024, as well as data back to 2016: 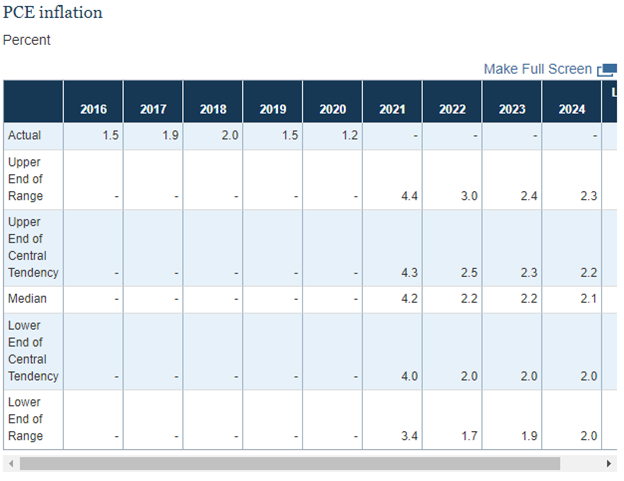 On the one hand, the forecasted 4.20% PCE inflation for 2021 is a significant jump from the prior 5-year average of ~1.60%. Like CPI, however, the year-over-year September reading (4.38%) is measured against a low-point of 1.38% in September of last year. Putting this in another context; it is fair to say that our view of an investment portfolio that returns 20% in one year should be informed by the “bigger picture” if this same portfolio lost 10% in the prior year. So too should our view of inflation be tempered by understanding that most annualized monthly data points in 2021 are being compared to a 2020 pandemic economy which was decent for two months, shut down for three, and anemic for the remainder of the year. On the other hand, The Fed’s own forecast of Core Inflation has risen from year-ago levels, from 1.8% in 2022, to a most recently revised figure of 2.3% next year. Herein lies the muddy waters investors must wade through between the Fed’s data-based rise in core inflation expectations and a “gotcha” media mentality insisting they were wrong all along about an ill-defined “transitory” nature of rising prices. As the Wall Street Journal put it in September:

“A 2.30% inflation rate isn’t a big deal. Indeed, it would conform pretty closely to the Fed’s new goal of letting inflation run above 2% for a while to compensate for the many years it ran below 2%.”

To this we would add that the media is making more out of inflation expectations than investors seem to be. Longer term nominal bond yields would be expected to rise considerably with universally higher inflation expectations as investors ditch low fixed income yields not expected to keep pace with inflation. Yet yields have held remarkably steady, even as rear-view inflation figures rise. In the chart below, nominal yields (reflecting expectations) have remained steady, even as real-yields (reflecting hind-sight inflation data) have plunged. Remember, yields and prices in the bond market have an inverse relationship. Plunging yields means rising prices. Some of this stability may be from the Fed, but we think investors, rather than commentators, have bought into some version of “transitory” expectations. 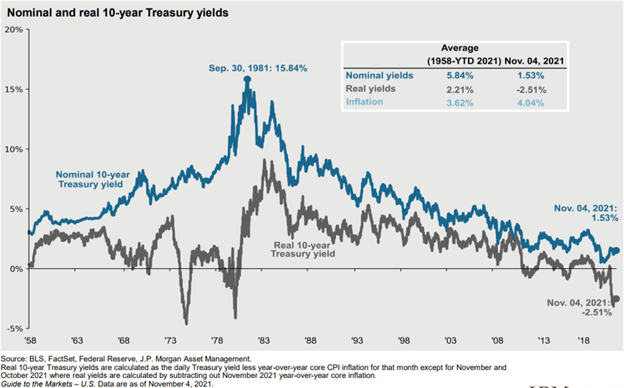 The Fed has since announced a tapering of quantitative easing (bond purchasing) measures, which has the effect of loosening their grip on the yield curve but will have no effect on inflation. CCR Wealth Management continues to expect the first actual interest rate hikes (which do have an impact on inflation) to begin in 2023. From our unofficial surveys—this is now an out-of-consensus call. We feel there are politics at play which will likely continue the Fed’s long-standing history of being behind the curve on interest rates. Our opinion on this topic could change quickly in the coming months as the data rolls in. No one predicted this inflation surge in the depths of the shutdown. Few whose outlooks we have sampled hold great convictions in their predictions.

One last thing on the taper announcement: In June we expressed skepticism that we would see a replay of the “taper tantrum” of 2013, and we have been proven correct. The Fed announced an intent to begin reducing their bond-purchasing regime in mid-September (beginning this month)—and the markets have been “melting up” since then. An “expected” surprise is no surprise, of course.

We also wrote in June that we see the labor situation as being the key component to watch, and we believe this is still the case.  More specifically, there has been a significant disconnect between our employment levels and the recovering economy. Employment can be (and is) measured in several different ways: non-farm payroll levels, the unemployment rate, wage levels, and “employment participation” being just a few of them. We suggested that disappointing employment metrics as measured by the non-farm payroll report (released the first Friday of every moth) in April and May were likely the result of a renewal of extraordinary government assistance checks sent to everyone not ready to rejoin the labor force (the bill passed in March of this year). These benefits expired the first week of September. Along with 5.4% CPI being announced for September, we were again treated to another disappointing labor statistic of only 194,000 jobs being created—against expectations of 500,000.

This report is the primary cause of delay in this Outlook not being delivered to you in October, dear readers.

A stubborn 5.40% inflation measure in September coupled with consistently disappointing labor statistics smacks of “stagflation”—the financial horror of the 1970’s. So, we gave it another month, as September’s jobs data still reflected a partial month of extraordinary unemployment assistance. Sure enough, last week’s report showed 531,000 jobs created in October (the largest increase in three months) and saw September and August employment figures revised upward by a total of 235,000 jobs. This job growth happened concurrently with a decline of roughly 9 million from the government’s enhanced unemployment benefits in September. Yet, as we all know, labor shortages persist as other frictions remain in the labor market: early retirements and perhaps even vaccine mandates among them. Still, CCR Wealth Management’s expectations are for a continued rebound in the jobs count going into next year. 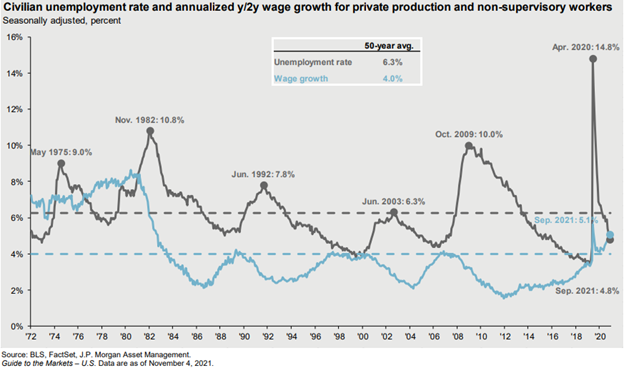 Wage growth continues to be the most interesting aspect of today’s inflation ingredients (like you, we are growing weary of the “supply chain” explanations). Wages are sticky. Wage raises have been widespread throughout the economy as businesses, large and small, have tried to attract workers to unfilled job openings. Wage hikes are virtuously impossible to reverse (unless by layoffs). Average hourly wages in the private sector rose 0.40% in October from September, and 4.90% from last year. As the Wall Street Journal points out, “In the 15 years before the pandemic, wages grew an average of 2.50% a year”. Higher wages could lead to a more permanently high base inflation rate, north of the ~2% threshold we’ve lived with for the last decade and more. We think this step-up in wages supports the view that while inflation will come down, it is likely to settle at somewhat higher levels than we are accustomed. 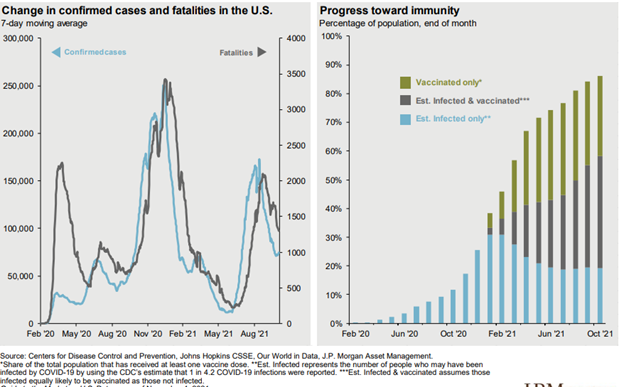 We are less concerned about the “supply chain” fixation in much of the press. Dr. Scott Gottleib, former FDA commissioner and one of the more authoritative voices on the Covid phenomenon and the associated policies (in our view) recently announced the end of the pandemic here in the US. Whether vaccinated or previously infected, the US antibody population now approaches a “herd immunity” level, and we expect Covid is in the process of transitioning from pandemic to endemic. US markets opened before the rest of the world, and with greater gusto. We do not dismiss the effects backed-up supply chains around the world are having on consumers and businesses, but from an investment standpoint (ultimately the purpose of these Outlooks), we see little reason to obsess over unpredictable near-term complications. In this we listen most attentively to the markets. Our expectation of rate increases still being a year or more away coupled with an increasing return to normalcy not only here, but around the world, has us expecting equities can fully sustain current valuations, and rise further from here. Q3 earnings season is winding to a close, and as of the end of October, 80% of companies reporting have exceeded expectations. We expect this momentum continues through the end of the year. 2022 earnings will, however, have a higher bar to clear—but by this time next year, we expect that much our supply-chain woes will have cleared. As stated in June, equities are the best antidote to inflation.

Please don’t hesitate to contact your advisor if you would like to further discuss topics in this Outlook.